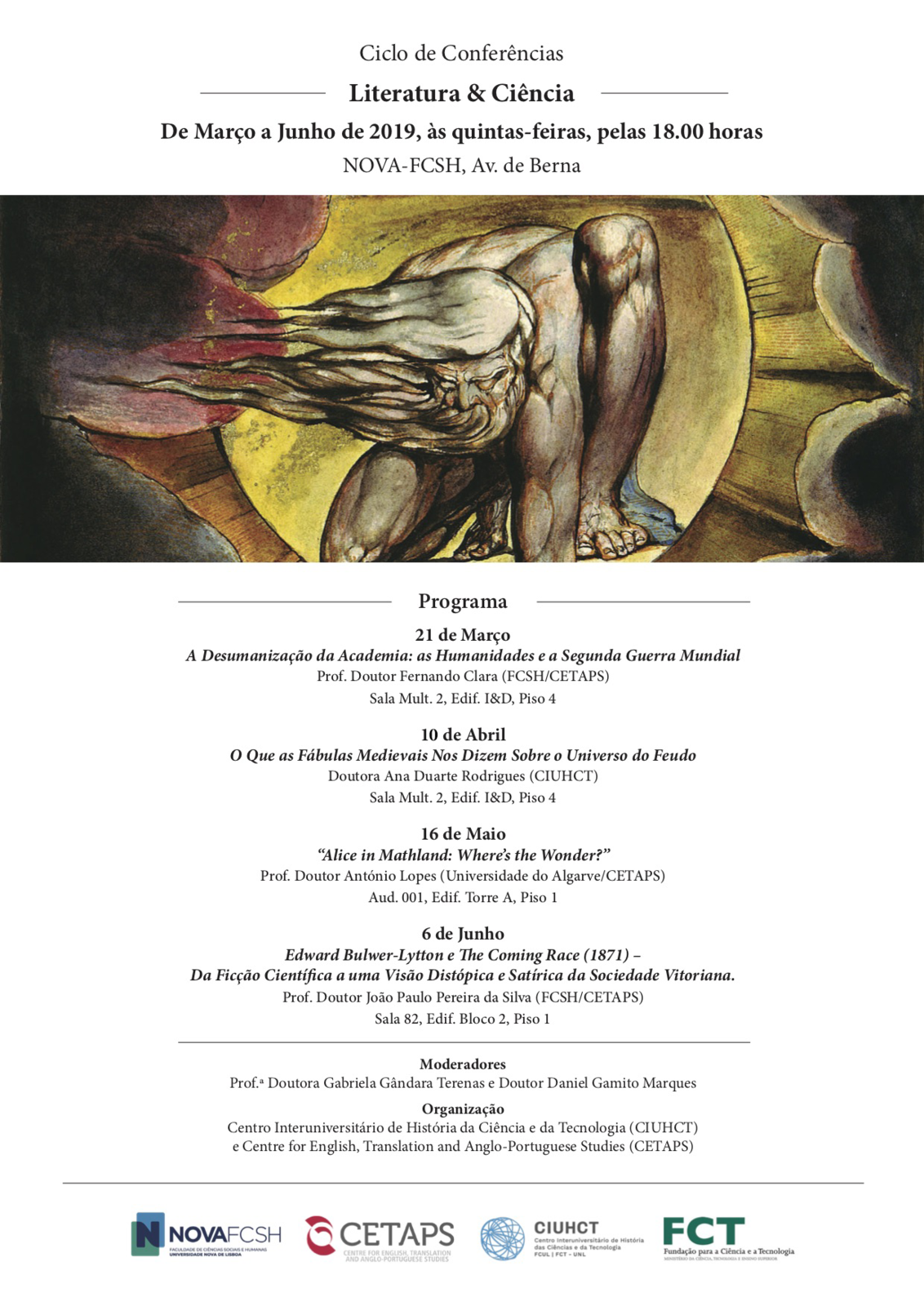 The fourth edition of the lecture cycle Literature and Science is organised by Daniel Gamito-Marques (CIUHCT) and Gabriela Gândara Terenas (CETAPS). Lectures will take place between March and June, usually at thursdays, 6pm, at NOVA FCSH (av. de Berna, near Gulbenkian).

In the hybrid discipline of literatura and science, it is usual to study the way science, technology and/or medicine are represented in literary works. That is the approach in this year's edition.

'The Society of the Algorithm" debates

Are we renouncing part of our individual privacy in name of more efficiency and welfare? To what point do mechanisms subtracted from any public accountability intersect with our collective life? Legal frameworks and standards of conduct regulating privacy are important, but are they enough? Are there algorithms that foster autonomy, freedom, and emancipation?

This cycle of debates takes place at the Culturgest Foundation, and is organised by Davide Scarso. The first, in November 2018, was dedicated to Facebook, data science, and the digitisation of collective life, and the second, in April 2019, was dedicated to Big Data and health. Do not forget to follow the recently created Facebook group dedicated to covering these issues. 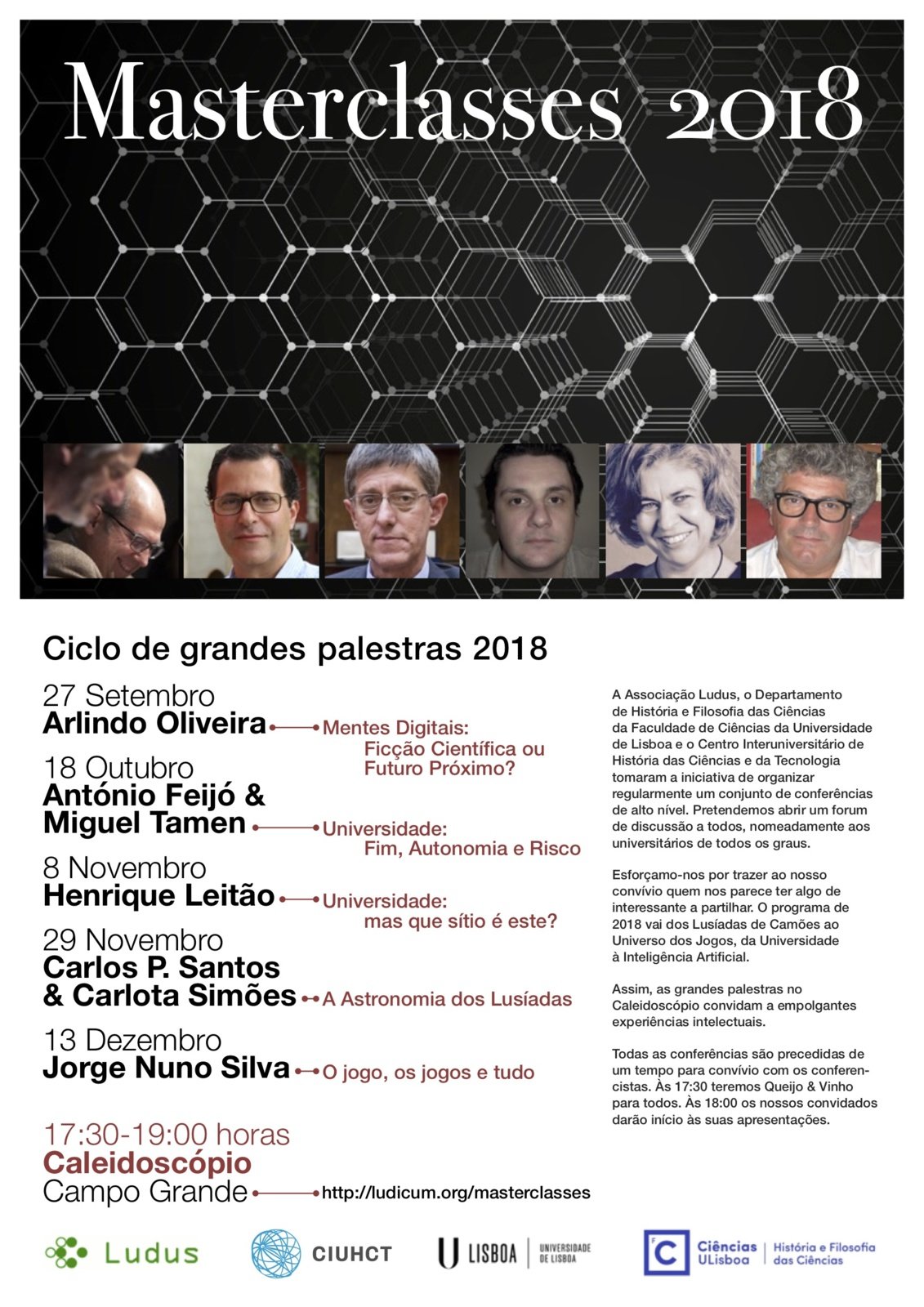 Associação Ludus, the Department of History and Philosophy of Sciences of the Faculty of Sciences of the University of Lisbon, and CIUHCT have taken the initiative of organising a series of regular, top-notch conferences. We intend to open a forum of discussion open to all, namely academics from all levels.

Our effort aimed to bring to the discussion those with something interest to share. The 2018 programme went from Camões' Lusíadas to the world of gaming, from the University to Artificial Intelligence. Thus, the lectures at Caleidoscópio were an invitation to exciting intellectual experiences. This programme will be continued in the near future.

These lectures have been organised by the Medea Chart project since 2017. The project began that year and will last until 2022, with funding from the European Research Council, and coordination by Joaquim Alves Gaspar. Sessions take place at the Faculty of Sciences of the University of Lisbon, and aim to disseminate ongoing research, which is why its scheduling is irregular. For more information, please contact the project's manager, Ana Margarida Nunes.

These conferences were a joint organisation between CIDEHUS, CIUHCT and the Institute of Social Sciences, in association with the HoST — History of Science and Technology journal. They took place year-round at the Faculty of Sciences of the University of Lisbon, on a bimonthly schedule, between 2009 and 2017. Ana Cardoso de Matos (CIDEHUS-UE) e Ana Simões (CIUHCT) were the organisers.

This series of seminars is devoted to the presentation, discussion, and future perspectives of collections, archives and building premises associated with the history of research and teaching of science in Portugal. They took place usually at 5pm, in the Manuel Valadares amphitheatre of the Museum of Science, Museus da Politécnica, University of Lisbon. Researcher Teresa Salomé Mota was responsible for the organisation, which had nine sessions in total [titles in portuguese]:

CIUHCT and the Centro de Estudos Clássicos (CEC) organise together a series of seminars devoted to the presentation, study and discussion of selected ancient scientific texts. The seminars took place between April 2014 and May 2015, with the following sessions: