The CIUHCT logo uses an image obtained via computerized tomography (CAT) of 16th Century celestial globe. The globel symbolizes the wide range and transdisciplinary character of our research lines. If the history of sciences researches the traditions of ancient knowledge, like Renaissance cosmography, and the history of technology tackles its practical applications and economic implications, its interest dates to the most recents practices of technoscience, of which applied X-ray refraction, used in hospital imagiology, is a part of. Moreover, the image of the renaissance globe, built in Augsburg, Germany, preserved in the current day at the Palácio Nacional de Sintra, expresses CIUHCT's committment to studying existing scientific and technological heritage in Portugal (instruments, manuscripts, archives, and other), heritage that has a supranational meaning. 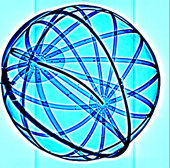 The celestial globe at the Palácio Nacional de Sintra (Inventory number 3457) dates to 157 and is attributed to a prominent instrument maker: Christopher Schissler, the Elder (1531-1608). The director of the palace, Dr. Inês Ferro, responsible for the collection of which the globe is a part of, gave all her support to Samuel Gessner, a CIUHCT member, in studying this very rare piece. She authorized the piece's transport to the National Institute of Oncology, in Lisbon, in March 22, 2009.

The examination was performed by Drs. José Carlos Marques and José Manuel Afonso, and by the technical assistants Paulo Dias and Ana Isabel Ferreira. Several radiographs were produced in the presence of a team of research that included members of CIUHCT, namely Marta Lourenço and Cândido Marciano da Silva, as a well as a technician from the Conservation and Restoration Laboratory of the IMC, Dr. Ana Mesquita e Carmo.

The images of the globe, obtained using a SOMATOM Sensations 16 multi-layer tomography device made by Siemens, revealed a completely metallic structure, supported by a fixed central axis, composed by 12 straps screwed to two caps, unified by a cross-sectional ring — an unusual structure that none of the previously contacted globe specialists had anticipated. The first CIUHCT logo was then developed from one of these images, by the graphic design company Morgan Project.

In 2017, portuguese design company GBNT produced a new version of the CIUHCT logo, simplifying the lines of the source image, and selecting a new typograhy and color palette, part of a complete visual identity package. This version is present across all CIUHCT plataforms and printed materials. The logo can be downloaded below, in a zipped file containing different orientations, file formats, and chromatic variations.