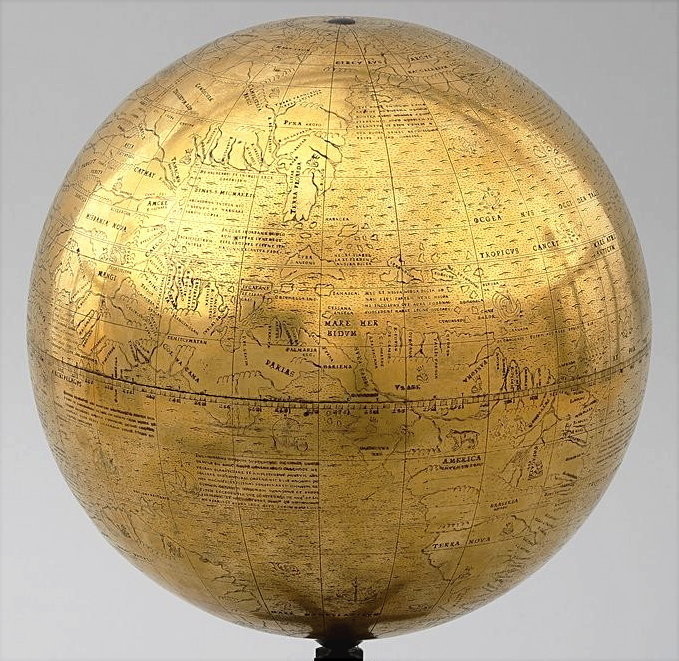 After the discovery of lands to the West in 1492 and the opening of the sea route to the East in 1498, the great problem facing European geographers, cartographers, and cosmographers was the question of how these western lands related to the eastern shores of Asia, and the related questions of: What is the length of a degree?  What is the size of the globe?  What is the breadth of the oikumene?  What is the distribution of lands and seas over the surface of the globe?

In the first two decades of the 16th century, many differing and conflicting solutions were suggested for answering the question of whether the new lands to the west were part of Asia. Two events occurred, however, in the early 1520s that precipitated a crisis in Renaissance cosmography and cartography, and threw into turmoil all of the hitherto proposed solutions. One event was the publication of the Cartas (Letters) of Hernán Cortés (1485-1547) from Mexico to Emperor Charles V. The other was the return to Spain of the Victoria, the ship that completed the circumnavigation of the globe initially led by Magellan. The previously proposed theories of world geography were incompatible with the new knowledge disclosed by the Cortes letters and the Magellan voyage.

Johann Schöner (1477–1547), German mathematician, geographer, cartographer, astronomer, astrologer, and globe maker, confronted these problems and, by the thoughtful selection of some aspects of the each of the prevalent geographical theories, resolved these issues by combining America with Asia, by equating America with Asia! Historians have tended to view this as a throwback to Columbus’s ideas but, in the context of the geographical and cosmographical theories of the 16th century, what we today might view as Schöner´s mistaken notion was actually an advancement in the European conception of world geography. A few minor modifications were later made to Schöner’s mistaken image of America-as-Asia, leading to our familiar image of the modern world.

Gregory McIntosh has a Bachelor in Philosophy with a much diversified professional experience which includes aeronautical engineering, art gallery direction and project managing, and is a well-known author in early modern exploration and cartography, particularly in the Piri Reis map. He is doing research on maps and nautical charts between 13th and 16th century as part of his PhD project.