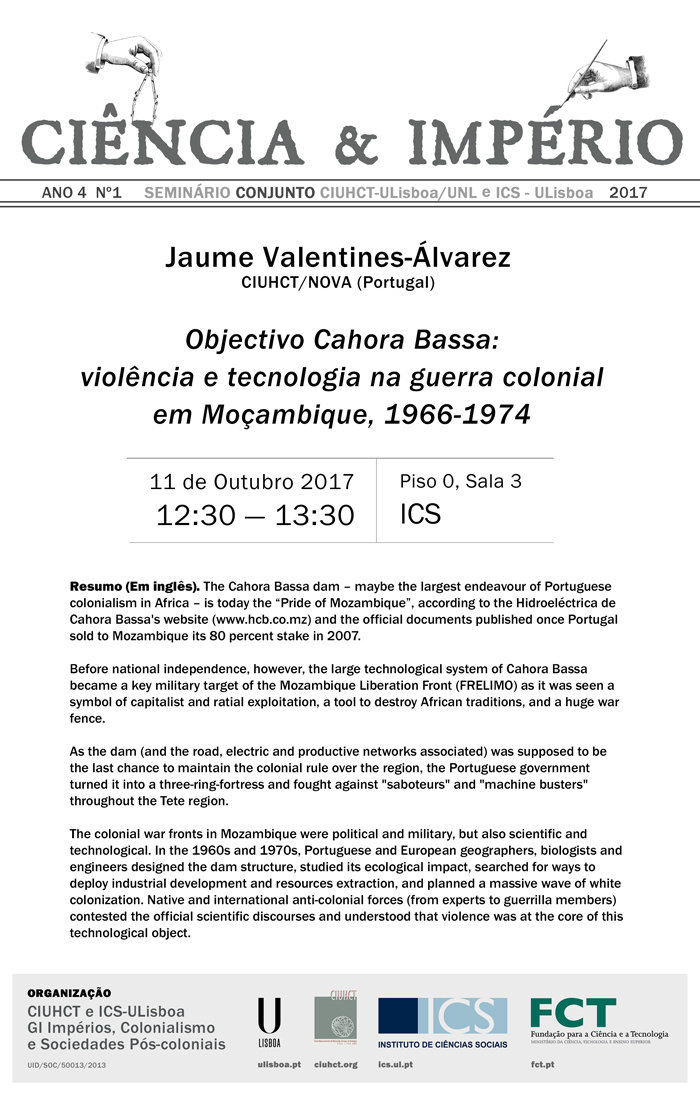 The Cahora Bassa dam – maybe the largest endeavour of Portuguese colonialism in Africa – is today the “Pride of Mozambique”, according to the Hidroeléctrica de Cahora Bassa's website (www.hcb.co.mz) and the official documents published once Portugal sold to Mozambique its 80 percent stake in 2007.

Before national independence, however, the large technological system of Cahora Bassa became a key military target of the Mozambique Liberation Front (FRELIMO) as it was seen a symbol of capitalist and ratial exploitation, a tool to destroy African traditions, and a huge war fence.

As the dam (and the road, electric and productive networks associated) was supposed to be the last chance to maintain the colonial rule over the region, the Portuguese government turned it into a three-ring-fortress and fought against "saboteurs" and "machine busters" throughout the Tete region.

The colonial war fronts in Mozambique were political and military, but also scientific and technological. In the 1960s and 1970s, Portuguese and European geographers, biologists and engineers designed the dam structure, studied its ecological impact, searched for ways to deploy industrial development and resources extraction, and planned a massive wave of white colonization. Native and international anti-colonial forces (from experts to guerrilla members) contested the official scientific discourses and understood that violence was at the core of this technological object.

When dealing with extreme political violence in colonies, political and social history have not paid much attention to technological conflicts. At the same time, violent resistances as part and parcel of scientific negotiation and governance have not been extensively treated in the history of science and technology and STS studies. In this sense, this research might have two main goals: 1) to bring technology to the fore to have new insights into the colonial war and the independence movements, and 2) to analyse how the ways of knowing, of doing and of regutaling science and technology (Pickstone, 2001; Gaudillière, 2006) can be entangled with forms of violence.